Do pastors still call people to the “altar” to repent and/or publicly confess Christ Jesus as Lord and Savior? In church buildings where I attended meetings as a young Believer, there were two long benches at the front of the church called altars. Each Sunday morning and night, after the pastor preached, he would make the plea for sinners to come forward and give their hearts to God. If no sinners came, he invited the people to gather around those altar benches and pray.

Some people came and remained at the altar for a period. They recognized that some individuals had serious needs, and would gather around, pray with, and intercede for them. Some of the ones that came remained less than a few minutes. Other ones did not go to the altars. Instead, they milled around fellowshipping.

People can say what they wish about “altar calls,” but in the days when many people were strongly committed to God, those altar benches received a lot of tears. Many a soul convicted of his or her sins wept on those benches in repentance. Many mothers prayed and wept over lost children. Men, big strong men, accomplished men, wept in humble submission. Their souls longed for a more dedicated and powerful relationship with God. Many people were set free from bondage, received solutions to problems and answers to serious questions. Many people were healed. END_OF_DOCUMENT_TOKEN_TO_BE_REPLACED 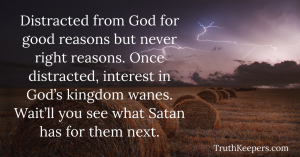 “Therefore it is no great thing if his ministers also transform themselves into ministers of righteousness, whose end will be according to their works.” — 2 Corinthians 11:15

When Satan’s “ministers of righteousness” look for sheep’s clothing as a disguise, they do not seek to take it from another wolf. They attempt to steal a covering of clean white linen from God’s people. Clean, white, linen is the righteous acts of the saints. (Revelation 19:8)

“How can they take our linen?” someone may ask.”

They do not actually take it. They take the outward image of it and attempt to cover their image. Sometimes they use a clerical collar. I personally know plagiarists that search Social Media for the posts and articles of godly people. Hirelings do the same thing to make themselves appear much deeper spiritually than they actually are. Then there are the ones, such as the man I am going to expose in this article.  END_OF_DOCUMENT_TOKEN_TO_BE_REPLACED