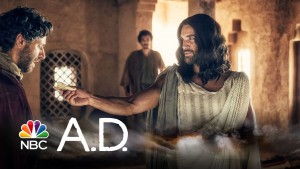 At the end of this article is an email from David Jeremiah’s office.  It is in response to a question concerning his involvement with New Age/Roman Catholic Roma Downey and her husband Mark Burnett.  There is no answer in the response to the question of why Jeremiah joined with Downey and Burnett to write two books for “A.D.: The Bible Continues.”

First, I thought, “Wolves, sheep’s clothing.”  In other words, there is no superficial way to determine that they are not true Christians.  However, their fruit is New Age mysticism combined with Roman Catholicism.    Their production, “A.D.: The Bible Continues,” in my opinion is a mixture of truth, heresy, and extra-biblical material.  It is perplexing that professing Christians continue to watch their films and celebrity preachers continue to grovel before them. 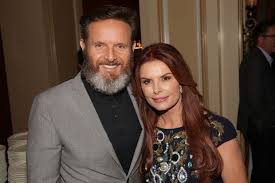 Second, I was impressed how well Downey has learned, and understands how to execute Christian-speak.   She fluently spoke the language of Christians while claiming the Holy Spirit’s involvement in their work.  But then, she is an actor:  I wouldn’t expect anything less than a perfect overlay of her words with no glaring glitches.  It reminds me of another New Age professing Christian (an oxymoron), Oprah Winfrey, who allegedly received coaching of how to Christian-speak.  I believe that diabolical individuals have realized that Christian-speak is the only requirement for being accepted as a Christian in this present great apostasy.

Next, I thought of how this generation has ceased gathering scriptural knowledge themselves, depending on other people to do all the work for them.  They merely receive it via a pastor or tele-heritic, or perhaps via religious music.  So I wondered how long before Downey and Burnett’s work will be turned into a “Bible”.  Perhaps it might become an apocrypha of sorts with the included “bible” subjected to its embellishments and distortions.

Then I thought of Jeremiah’s customer service (?) representative Alyssa Huey’s statement that people would see Downey and Burnett’s “passion to present the Gospel of Jesus Christ and the formation of the early Church to a secular world.”  I’ve witnessed secular producers being passionate about secular productions.  Likewise, D & B’s passion to present their miniseries is not evidence that it is the Gospel of Jesus Christ.  I wonder how many people will be drawn into the New Age Movement or Roman Catholicism through the series.

Jeremiah appears to believe that God necessarily needs what they are doing to reach the secular world.  I believe there is no greater power than the true Word of God imparted and empowered by the Holy Spirit.  However, I concede that it is much different today than it was in the last century.   Much of the world is dependent on technology.  Information is increasingly being disseminated and gathered by technological means.  Most Americans have lazy minds.  They’ve been “dumbed down” by the public education system, and are heavily dependent on visuals and sensual attraction.

Concurrently, the majority of Christians have nearly ceased witnessing to the lost, and present no public example of Christianity. The door is wide open for deceivers to completely reap a harvest.   The blunt truth is that there appears to be no Christian alternative to D&B.  Their easy access into Christianity has been made possible by the incredible invasion of hirelings and heretics that introduced and established New Age heresy.  Additionally, one should consider that David Jeremiah has become a proponent of Contemplative Spirituality.  It might be worth noting that every professing Christian who comes out in favor of Contemplative Spirituality (e.g., Rick Warren, George Wood, David Jeremiah, etc.) immediately exhibits total lack of discernment, and abandons all objections to the most diabolical individuals ever endorsed and permitted to “minister” to Christians.

Christianity is no doubt in a period of great apostasy and it is going to get worse.  I believe that it is the final one before the Antichrist and False Prophet appears.  If I am correct, it will be a time of great deception so clever and intense that even the very elect would be deceived, if that were possible (Matthew 24:24).

Finally, there are these verses in 2 Thessalonians 2:9-12 that predict a period of diabolical and extremely powerful lying signs and wonders.  God’s word does not say exactly by what means these lying signs and wonders will be conveyed to the world.  However, I know that television is an outlet for many lying signs and wonders.  Special effects can make any lie, no matter how incredible it is, appear as truth.  Hollywood has been in the process of, as I heard a Drama professor once say, “making evil appear beautiful” for a long time.  I do not trust New Age Roman Catholic producers and their Celebrity preacher shills to distribute truth through a medium notorious for lying signs and wonders, especially in a time of apostasy.

Eventually, professing Christians must cease ignoring the signs that something is not right with certain people and their activities, including celebrity preachers.  They must stop explaining away the anomalies, effectively giving them, and the beguiling merchants of religious sleaze whom they embrace, a pass.

If the cleverness of deception continues improving, we may have only the Holy Spirit’s warning that someone or something is not of God.  We do not want to be drawn into deception in this dangerous period.  There is at the present ample and visible information to make the right decision about Downey, Burnett, and Contemplative supporter, Jeremiah.  If that information and the warnings are ignored again, as they were in D & B’s previous videos, eventually the ignorers will be unable to discern any deception.

Another factor is completely clear.  There is an unintended effect of the volume of critiques and detailed information about Downey and Burnett and their projects.  It appears to be having little effect on the deceived masses.  However, D & B seem to be employing the criticism as a means of quality control to refine their public persona.  Having already mastered Christian-speak, at some point, further expose’ of them and all heretics will be fruitless.  If people have not locked onto truth by then, perhaps they never will.

Because they reject love for truth, “God will send them strong delusion, that they should believe the lie, that they all may be condemned who did not believe the truth but had pleasure in unrighteousness.” – 2 Thessalonians 2: