Are You Qualified to Speak Truth?

I have heard several notorious heretics denounce people who expose them by saying, “Have you ever noticed that the ones criticizing you never do anything significant?” What 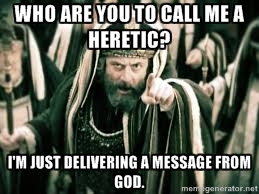 they mean is they do not have a large church building, a TV program, or something else that can be lauded as a symbol of success.

However, they fail to realize that their snide question implies an unscriptural standard for truth speakers. Their standard would eliminate all the prophets. John the Baptist and the Lord Jesus Christ would also be disqualified. The truth is that all it takes to qualify someone to speak the truth is that they are true followers of Christ Jesus the Lord. But that’s not good enough for the heretic that is chaffing under the exposure by someone he considers insignificant.

Imagine one of the disciples running into an old acquaintance. The acquaintance might ask him, “What are you doing nowadays.” The reply might be, “I’m just following Jesus.” It doesn’t sound like much to an individual who does not know or (care) about what it involves to truly follow Christ. Such an individual might wonder, Why doesn’t he get a real job, or do something significant. The religious leaders did not consider following Jesus to measure up to their standard of doing something significant. After all, they had their offices, positions, and places in the synagogues. Further, it was difficult and important business praying on the street corner and sneaking around after Jesus trying to catch Him in a religious gaffe. It really is a lot of work being a significant hypocrite when there are so many adoring fans.

Contrary to pharisaical opinion, it is a significant work following Jesus and staying current with the will of God in one’s life. One may not have a massive religious enterprise or building to show for it, but those things do not qualify anyone to speak truth against heresy and heretics. It becomes more difficult and significant when one is appointed by God to expose and denounce the activity of the “spots” (Jude 1:12). Give them the truth and they ask for credentials. The credentials are the same as they were when the Apostle Paul walked the path of full surrender. He wrote, “From now on let no one trouble me, for I bear in my body the marks of the Lord Jesus.” (Galatians 6:17)

Bethel Music; a work of Darkness