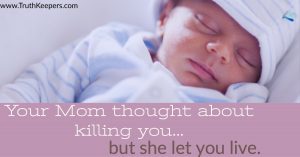 New York’s decision to abort full term babies does not have as much to do with a woman’s reproductive right as it does with creating outrage. Outrage deferred metamorphoses into apathy. The more such apathy—which is actually moral shutdown because the cost of being moral is too painful to the comfort zone—the more evil they can get away with committing. In this case it is bringing our nation closer to arresting, torturing, or murdering citizens that do not agree with them. That is still a far fetched idea for some people. But they never thought they would witness a governor and presidential candidate stand arrogantly and smugly, and announce State-sponsored genocide of full-term babies.

Until their heels leave the womb, those sweet and virtually the only symbols of innocence and purity remaining in our society, are in danger of being murdered. Instead of leaving the womb to be sheltered in a mother’s loving and secure arms, their glimpse of life will be terrifying, unbearably painful, and fleeting.

How godless and animalistic does a human have to be to commit murder of a baby? How coldly brutal, Nazi-sciopathic, and dead to the natural instinct of love and protectiveness for a baby, must they be? Could such a one ever hold a baby with love and wonder? Would a baby instinctively shrink back in terror when they reached for him or her? Will New York employ Muslim terrorists to murder full-term American babies? Will they abolish the penalty for pedophiles and other child abusers? How can they convict and send a mother to prison for murdering her children when they would have done the job for her if she had asked them during her baby’s crowning.

The paradigm they are following is the Hegelian Dialectic. They intend to push people with repeated outrage until they become as sheep, in fear of the powers that be and overwhelmed with a sense of helplessness. With each outrage not properly responded to, they can gage how weak and unwilling to respond the opposition is. Eventually, the Conservative faction will implode to avoid the immense stress of the reality they have avoided and can no longer hide from.

The fact is, Christianity—the former bastion of morality—is fatally divided, rife with heretics and heresy, and leaderless—except for the showmen/entertainers that perform on Sunday morning and religious TV. The ones that recognize encroaching unprecedented evil have chosen to put all their effort into a vote every two years. Subsequently and consequently, the Democrat Party has become so corrupt that it has shamelessly brought our nation to the verge of moral desolation. They have removed their masks and revealed what they are and what they will do to Evangelical Christians and other Conservatives when they get back in power. They should be confronted about their wickedness at every turn. Professing Christians ought to rise up en masse, boycott, write letters, protest, pray, et cetera.

If you—professing Christian—are ever going to listen to a warning it is now. If you are ever going to begin praying more than mumbling a few sentences on the drive to work, start now. Set aside a time to pray and you will quickly understand how important it is. You will immediately fight numerous battles. You will suddenly have many things to do. Distractions will flare up and crook their fingers, beckoning you to come away with them. It will be one of the most difficult things you will ever attempt. There will be no doubt that the minions of Satan are opposing you.

Everything will suddenly become more important than prayer. Maybe that is why the old saints shut themselves in prayer closets—to shut out the diabolical noise and distractions. If you do not decide up front and make prayer the most important thing you do, then you will decide that you just don’t have the time to pray. Then you’ll remain in the barren and weak position as before. Are you really going to take that intimidation from the enemy of your soul?

We may never understand prayer, why or how it works, and why we benefit so much from praying, but there is one thing that no one should have trouble realizing. That is, if it is so unnecessary, why is it so difficult to establish a faithful prayer habit? Why the great battle that prevents us from praying?

I will be a witness for the great benefit of prayer. I know how it feels to be a near dysfunctional Christian because of short and rote praying. Cheryl and I rise early to pray at length and intercede for thousands of people. I do not state that braggadocio. It was a very difficult battle decades ago to establish that paradigm and is still a battle to remain faithful to it. The key is one’s mindset. Are you willing and will you confront your spiritual obesity, deny your indulgences, and pray?

Finally, I know how difficult it is to begin, but here is a solution. Purchase a small notebook, write some things you wish to pray about and people that asked you to pray for them. List all your family, friends, co-workers, et cetera. List the heretics and corrupt politicians. Pray for the persecuted Church. Pray for your pastor and his family. Pray for our nations leaders, that God would convict the bad ones and help the ones on the side of good. Write down your spiritual and physical needs. If nothing else, pray for the babies at risk of beutal murder.

Before you know it that little book will be filled and you will be spending much time in prayer, your spiritual eyes will be open and your spiritual ears will hear. Your inner person will awaken to reality you never knew before. Once you realize what you had been cheated out of, you will never go back.

If there is any hope for Christianity and our society it is praying saints. If this is the Last-days, prayer is essential to endurance. Either way praylessness is certain defeat, and praying is an essential means to victory. Pray that God will judge and deal with the wicked individuals who voted for the so-called Reproductive Health Act (RHA). It actually has nothing to do with reproduction, but is a license to commit genocide of infants. In this period of cold-blooded and diabolical State-sponsored terrorism of babies, prayerlessness is a sin.

China: a portent of imminent persecution