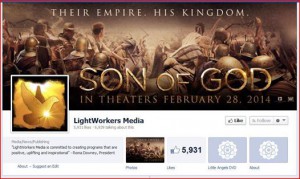 To understand what’s wrong with the “Son of God” movie, it helps to understand the purpose, mission, and intent of Lightworkers, since the movie was made by Lightworkers Media.

The crux of it is in this statement from the Lightworkers.org website (link at bottom of article): “As Lightworkers, we are creating a vision more suited to humanities evolving divine nature.” What that means is they believe humans are actually God and that we as humans are in the process of becoming aware of that.

When they refer to “divine spirit,” they mean the collective consciousness, which, according to their teachings, is the whole of humanity as God. This is what is meant by the term cosmic humanism, a belief system also known as the new age, or theosophy, because they believe that humanity is the cosmic Christ. This is a teaching that stems from hermetic magick.

The intent of the Lightworkers is “to facilitate an awakening for all humanity.” What they want us to awaken to – this is where the problem lies, because it is a philosophy of…lies.

They speak of “co-creating,” which means creating “with God.” They speak of working with guides and “higher selves, and they regularly unite with Gaia. These are entities from the realm of familiar spirits, i.e., demons.

They equate magic with blessings and they claim you (we) are the source of them. “For all magic, all blessings pass through the one who directs them. And that is you.”

Their global meditations are scheduled to take place during Equinoxes, Solstices and new and full moons. That’s because these are considered by many traditions of magick and witchcraft to be auspicious times for spiritual workings.

They don’t hide the fact that they are using magick. They even say, regarding one of their rituals, “This is a form of high group magic.”

As you can see from reading through their About page (at the link below), they intend to increase their numbers. What better way than to make a movie seemingly based on the biblical accounts of Jesus?

They believe it is their responsibility and power to create a new heaven and a new earth. And THIS is what they refer to as The New Age. See, just as God has a plan, so does the devil. A counterfeit one.

If you watch the video on this page (also at the link below), you will hear it speak of a time when we as humanity “surrendered our divinity.” It’s really about “inner power” for them. And the so-called divine plan that they refer to is the plan laid out and also referenced in “The Great Invocation” by Alice Baily, founder of Lucis Trust (formerly known as Lucifer Publishing Company). Incidentally, when I was a Lightworker, my friends and I memorized and often recited “The Great Invocation.”

Note the last word in the video: “Unite.” It is the clarion call of the Lightworker movement and will be used, with scripture in tow, to shame anyone who resists their programming. And of course, anyone who knows about Alice Bailey knows that the purpose of that “unity” is the one world religion.

This, my friends, is the ultimate goal of the Lightworker movement and all its tools, including the “Son of God” movie. No biblical Christian joins such a thing willingly; only through deception, and this is the beginning of that deception.

Know your Bible, know the true Son of God, the one who IS God and who tells us, “Ye are from beneath; I am from above: ye are of this world; I am not of this world.” (John 8:23)

Don’t be deceived by drama, pretty faces, and special effects orchestrated by the enemy of God. Time is running short.

My interview with Jon Pounders on Day of the LORD Radio:
http://www.youtube.com/watch?v=TB4rQO54Iu4

Explosive Information about Roma Downey and the movie “Son of God”

Movie Review: ‘Son of God’ Is Most Certainly Not The Son of God